The Winter 2018-2019 IAM Journal will be hitting the doorsteps on IAM members by early November. Here’s a first look at one of several articles in this edition.

When the International Woodworkers of America merged with the Machinists Union in 1994, tens of thousands of timber industry workers found a welcome home as part of the IAM family. In the nearly 25 years since the merger, IAM woodworkers have consistently contributed to the union and to the cause of working families across the country.

“I’ve been a log scaler for 20 years,” said IAM Local W130 President Jon Irvine. “I grew up in a timber town — Willamina, OR. It had five saw mills. When you got out of high school, you went to work in a saw mill or you went logging. My dad was a supervisor at one of the mills and my mom was an HR manager at one of them.” 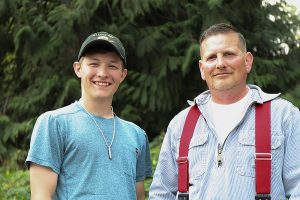 A self-proclaimed forestry nerd, Irvine possesses a passion for and understanding of the outdoors. As Local W130’s president, he tirelessly fights for his members, their families and the timber communities of the Northwest. He was recently part of negotiations with the timber giant Weyerhaeuser, which resulted in an industry-leading contract for the IAM’s roughly 1,100 members at the company.

We’re going to be the highest paid timber workers by far, out of anybody in the industry,” said Irvine. “Having that contract in our pocket will show these other people in our community who work in these non-union shops the huge benefits to organizing. We’re going to make a big push here starting right away. We’re already getting calls from some of the non-union mill employees.”

Timber towns throughout the Northwest were devastated in the early 1990s, when the government declared the northern spotted owl a threatened species and shut down most timber sales from old-growth habitat. Mills closed and thousands of jobs were lost, many of them union.

“I felt an obligation to that community, so I got into forestry,” said Irvine. “We were cutting old growth at what I believe was an unsustainable rate. And so, what we see today is that the timber industry is back, retooled with a sustainable model for a smaller log. There aren’t any mills around that can even cut an old growth log if they wanted to.”

Some older mills have re-opened and new ones have emerged, but the communities continue to suffer.

“One of the things that left in the ’91 crash along, with the spotted owl, was organized labor,” said Irvine. “What you see is all these saw mills popping up everywhere and they’re not paying living wages. We just had a fatality at one of them that could have been prevented. I believe the biggest area of growth for the IAM here in the Northwest is these saw mills.”

Irvine also serves as vice president of the IAM Wood, Pulp and Paper Council, which was established to connect Machinists Union members and promote organizing efforts. The IAM currently represents nearly 20,000 timber industry workers in the U.S. and recognizes the potential for growth in the Northwest.

About two years ago a Local 130 logging crew member died in a motorcycle accident. Irvine was serving as the local’s financial secretary at the time.

“Duane Salonka was a really popular member. A real go-to guy. He’d give you the shirt off his back,” said Irvine. “He had three boys all in their early 20s. I helped the family get death benefits for the boys, and I told them that their dad’s union legacy went far beyond just his death benefits.”

“I didn’t really know what I was going to do after my dad died. I wasn’t prepared at all,” said Salonka. “So, I got ahold of Jon and he helped me. He gave me all the people I needed to call, he helped me with finding a funeral home that wasn’t going to charge me 18 grand to have my father cremated.”

Irvine too lost his father when he was 21, and he knew it was a tremendous burden thrust upon Daniel. The tragic event sparked a relationship that continues to this day.

“It wasn’t right for such a young man to not have anyone left. I just didn’t want to leave him hanging out there,” said Irvine. “I’d like to think I’d go to the extent that I did for Daniel with any of our members’ children.” 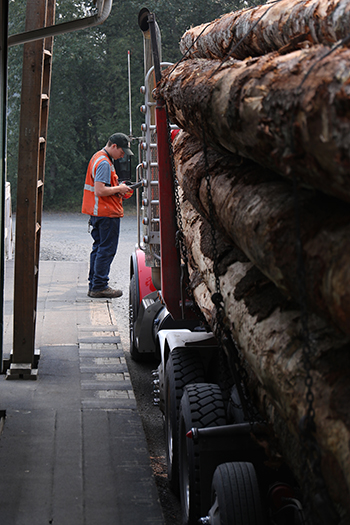 At the time of his father’s death, Salonka was working as a cook in Olympia, WA, making minimum wage. Irvine wanted Daniel to understand that his father’s union legacy included an opportunity for him to get into the trade if he wanted.

“He invited me out for a beer and dinner so we could talk,” said Salonka. “He told me if I was ever interested, he would put my name out there and help me get a job. A couple of months went by and I got really sick of working in the restaurant. I decided to call him back up.”

With Irvine’s help, Salonka entered a union apprentice program in Olympia, WA. Weyerhaeuser only hires experienced log scalers for their yards, so he is currently working for Pacific Rim Log Scaling and Grading Bureau, an independent grading service.

Log scalers are the final evaluators before timber is sold or enters a mill. It is a scaler’s responsibility to figure out the usable board footage and the grade of the log. The job requires a lot of mathematical calculating to make sure the timber buyer and seller have an accurate assessment of each log. Timber will then enter a regional mill to be cut into lumber or shipped internationally.

Salonka is nearing the completion of his apprenticeship and is already benefitting from a union contract.

“It means a lot to have a career job and especially to have the union behind me,” said Salonka. “What I was doing before, if someone doesn’t like you at a restaurant, there’s a good chance you’re not going to be working there very long. Now, I’ve got guaranteed hours, I’ve got the union to back me up if I get sick. They do take really good care of you.”

He’s gaining experience, seniority and is truly appreciative of what he continues to learn from Irvine.

“Jon is just a really generous guy. He does everything he can for the people,” said Salonka. “He takes care of them. And that really sets a standard for me.”