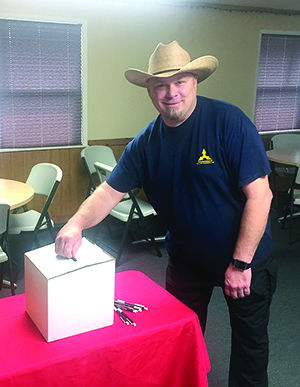 Member Steve Jolly looked pleased as he cast his ballot that secured a first contract for workers at KAI.

“This first agreement lays a strong foundation to build on for the future. The group worked hard to achieve a tentative agreement that recognizes the contribution these members make in supporting our military. The agreement included General Wage Increases in each year of the agreement and other very important provisions,” said District 751 President Jon Holden. “Both sides were motivated to reach an agreement so the contract could be approved on time by the government and workers would reap the benefits of union membership right away.”

“Congratulations to everyone who was involved in delivering a great first contract to our new members,” said Western Territory General Vice President Gary Allen. “These workers, their families and their communities all stand to gain from the strength, resolve and solidarity displayed by the negotiating committee and the members on the shop floor.”

A membership meeting was held on Saturday, August 11 to provide members an opportunity to hear details of the first agreement and get their questions answered a couple days before casting their vote.

“Working together our union negotiating team addressed every unfair issue my coworkers identified and wrapped it up in a solid first CBA,” said Mark Blau, who served on the negotiating committee and has been an IAM 751 member since 2011 working for several other contractors on NAS Whidbey. “I look forward to helping negotiate our next CBA. I am Union YES!”

Under the terms of the agreement, workers will receive:

Holden served on the union negotiating committee along with Chief of Staff Richard Jackson, 751 Attorney Spencer Thal, Business Rep Paul Veltkamp, and Mark Blau a member of the bargaining unit at KAI. Thanks also to Suzan Merritt for her support throughout the negotiation process.

“This is my first time serving on a negotiating committee and it was a great learning experience,” said Blau. “I was so impressed with all of our union negotiators. Jon Holden rocks with his tried and true negotiation experience, as he drove points home away from the actual bargaining table. Spencer ensured we were covered from a legal perspective. Paul had good advice and input. Richard Jackson, who serves as our calm and cool representative, pushed hard on every issue we identified as important. Suzan Merritt captured the minutes and discussion while Jesse Cote helped with the tough questions at the membership meeting after helping our group join the union.”

This first contract with KAI at NAS Whidbey is another example of how IAM District 751 continues to raise the standard for those in our community and specifically the 40+ members who perform critical work for the U.S. military.

See the original article in the District 751 Aero Mechanic Newsletter.